Ho ho ho, and Merry Christmas. Well, not quite yet. But 2016 is drawing to a close and the holiday seasons are coming up, and with that in mind, God himself would probably come right down and smack us in the face if we didn’t do an end-of-year #Christmas special for Bandcamp Roulette.

As the last edition of the year, I was determined to find the most messed up Bandcamp release associated with everyone’s favourite baby Jesus birthday, and oh boy, were there a lot. From tacky, painfully upper-class white people duos to some devout banjo-wielding Christian rock singer, the Christmas tag on Bandcamp was a goldmine.

And then I found it. 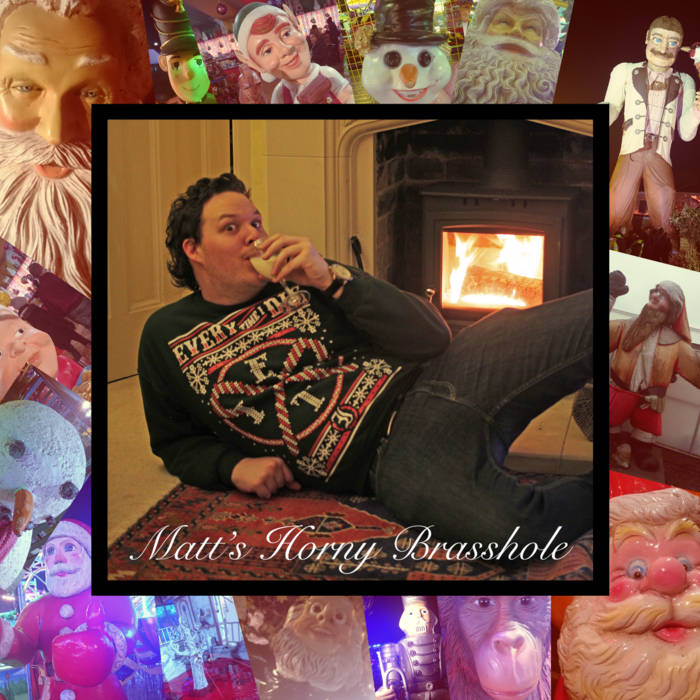 Already I was drawn in by Franco Danger‘s seductive pose in front of a crackling fireplace, sipping delicately from a glass of something murky and juice-looking. What made the album cover even more impressive was its collage of disturbing Christmas paraphernalia — crumbling snowmen and creepy Santas, all verging on the edge of insanity. I was speechless.

In the bio of this holy Bandcamp page, it stated that Franco Danger was the alter ego of Matt Alford (identity unknown, and completely undiscoverable on the internet) and that as Franco Danger, he is “able to create challenging, powerful ART.” And listening to this compilation, I couldn’t doubt that at all.

Even more amusing were the tags hanging onto this release: #experimental (undeniably on the same level as Brian Eno), #raptorcore (is that like… music for dinosaurs?), #raptor (again? Is this a new meme I’m not aware of yet? Or an old meme that has already fallen into obscurity?).

Danger‘s music is layered, with mouth horn noises filling in both the low and high ends of choir songs like ‘Away In A Manger’ and ‘O Christmas Tree’, and the musician’s hours of laborious recording has clearly paid off in the result. The jazzier classic ‘Let It Snow’, originally by Sammy Cahn and Jule Styne “back in, like 1945”, gets a similar treatment, but each layer sometimes struggles to keep up with the other and there are definitely moments where the horns are out of time. However, the eerie two-minute silent ending of the song redeems the cover and lifts it to glorious heights–some may say it’s an editing error, but I say it’s a stroke of genius.

‘Jingle Bells’ is a pleasant surprise on the EP, and Danger‘s modern hip hop influences can be heard on this track with his subtle beatboxing consistently providing the foundation and pulling the song together as a whole. It wouldn’t be a Christmas song cover compilation without the iconic ‘Jingle Bells‘, and the artist’s inclusion of the song shows that he knows what the people want. And that’s ‘Jingle Bells’ sung with mouth horn noises.

Happy holidays everyone. But especially you, Franco Danger.